After the release of "Commercially Inept" in 2014, Izzy Miller seemingly disappeared as soon as the tour to promote the record ended. For 2015 and most of 2016, he didn't show up much, leading a very reclusive lifestyle for much of that time. He could have easily called it a day, already charting two singles on the Billboard charts, played numerous shows and venues large and small, and selling countless records. But, in September of 2016, a single ("Back to Getting Over You") was quietly released to radio. Some have said that this was to test the waters to see where things stood since he had been out of the game for a while and no one really knew what to expect. But, perhaps we're getting ahead of ourselves...

Izzy Miller put together his first rock n' roll band in 2007. The band, called Before Existence, cut one single before disbanding. After that, several of the former members of Before Existence went on to become Storage in 2009. Storage was marred by rifts between members and went on hiatus multiple times between 2009 and 2011, but did manager to release one album in 2010. The album, "Pack It Up," was built around the success of the single "Just a Little More", which was receiving heavy radio play in the south eastern United States. Storage split again during the release of "Pack It Up" and, with the exception of a single short-lived reunion tour in 2011, has not performed together again since. Izzy has been very reluctant to discuss Storage in interviews and has been quoted as saying "What's done is done, I look forward to never dealing with it again".

Shortly after leaving Storage, Izzy released his first solo album, the acoustic "Back From Nowhere". Released in late 2010, the record didn't begin to match the success of his work with Storage. A few dates were played to promote the record, but it still fell on deaf ears and suffered from a lack of sales. Shortly after the release of "Back From Nowhere", Izzy decided to put together another rock n' roll group. After meeting drummer Smokin' Joey Gambrell on Craigslist, they began playing shows together and writing new material. This material would later turn into the album "Who Is That? Nobody." released in 2012. The last single released by the group, a non-album track titled "Where To Land", was released shortly before they disbanded in 2013 and peaked at #49 on the Billboard Rock Digital Downloads chart.

As the tour to promote "Commercially Inept" slowed down during December of 2014, Izzy became increasingly private and was only appearing in public to play the shows. He began turning down interviews and tour dates to further promote the album and the next single, "I Forgot to Get Drunk", failed to chart due to a lack of promotion. By the time the news came, he had disappeared. Throughout 2015 and 2016, he was rarely seen in public and rumors began circulating. To date, Izzy has never addressed any of them and refuses to talk about this time period in interviews.

As September of 2016 arrived, a single titled "Back to Getting Over You" was quietly released. Failing to receive radio play, the single still marked a strong return as it was the point where Izzy began coming back out into the public eye. The lone single would set the stage for something much bigger...

On December 1, 2017, the record came out and blew past the success of the first single. "American Times" reached #1 on Amazon and iTunes and received wonderful reviews. Several songs from the release became popular in certain radio markets: "One Night Stand" in the northeast United States and "American Times" (which was included on Classic Rock Magazines April sampler CD) in Europe

Taking some time off after the success of "American Times", Miller began working (along with Shane Davis of the Black Market Salesmen) on "Precipice" in mid-2018. In late October, a January 11, 2019 release date was announced and met with positive response. The album features an all-star group of musicians, including Miller, Shane Davis (Black Market Salesmen), Joey Huffman (Soul Asylum, Matchbox 20), Mike Daly (Hank Williams Jr., Travis Tritt), and Ben Jobe (Wolves of Chernobyl).

Miller claims in the liner notes of the album that:

"It was early May and I had just gotten back from Texas when, a few days later, my (then) girlfriend called me to inform me that she was leaving me for her ex. Considering that I was completely blindsided and thought everything was going great, things kind of took a turn for the worst after that.

When we walked into the studio not all that long after the whole ordeal, everything was cloudy. The arrangements weren't ready, there was no plan of what to cut, and there was no real plan to release any of it. About ten minutes later, it all started falling into place but I wouldn't realize that until very recently. The songs on this record really capture the six months or so after that split and, listening back to them, it's weird... It was almost like I was on autopilot during the sessions for 'Precipice'. The only thing that was certain during the process is that everything was uncertain."

"Precipice" was met with positive reviews and was hailed as "uncomfortable, but incredible, listening" by Maximum Volume Music. The lead single, "Another Drink or Two" was touted as "the perfect portrayal of the loss of love and a haunting feeling of loneliness" by Rock the Pigeon. 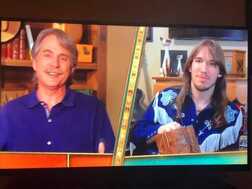 Izzy's sixth studio release, "Life on the One and Three", was released on April 24, 2020. The most personal record that he has cut to date, the record features five tracks and was produced by Shane Davis. The release features guest appearances from Mike Daly (steel guitar), Joey Huffman (piano, organ), Kris Poorman (drums), and Shane Davis (guitar, percussion) and, while sales suffered due to the COVID pandemic, the record was met with positive critical reviews.

On September 1, 2020, Izzy made his national television debut joining Jeff Foxworthy on "What's It Worth?", an A&E program.

After a somewhat busy (especially considering the circumstances) 2020, Izzy joined Shane Davis to form Turtle Mountain Records in early 2021 as the home for their future release and those that the produce for other artists. The first Turtle Mountain release came on April 30, 2021 in the form of Hew Tyler's record "Somethin' Foolish" which will be followed by the debut single from the Shane Davis Group, "Back Burner".

Izzy has since released two singles via Turtle Mountain Records, "Home Again" and "Who Am I to Blame", as well as "Back From Nowhere: 11th Anniversary Edition", the deluxe reissue of Izzy's long out-of-print debut solo record.